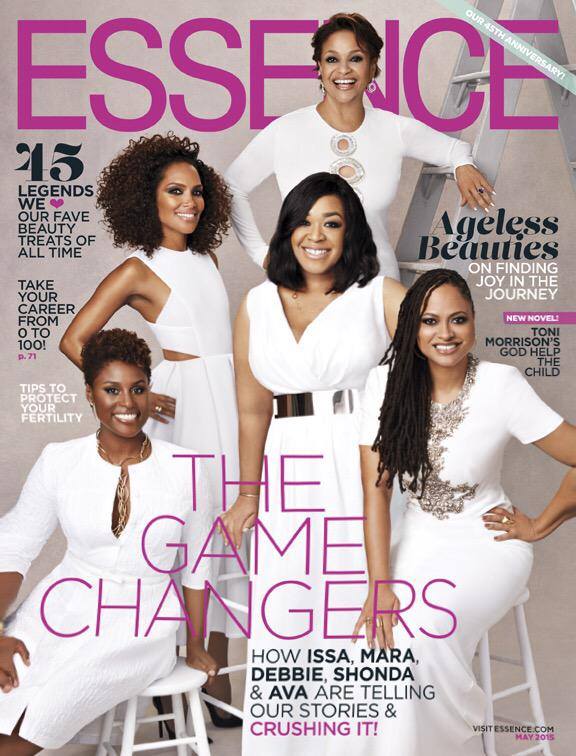 Talk about black power and beauty to boot…

Shonda Rhimes (Scandal, How To Get Away With Murder, Grey’s Anatomy,)  Ava DuVernay (Selma,) Debbie Allen (actress and director), Mara Brock-Akil (The Game, Being Mary Jane) and Issa Rae (The Misadventures of Awkward Black Girl) have been chosen to grace Essence Magazine’s May cover , aptly titled “Game Changers.”

Dressed in all white, the ladies are discussing the state of entertainment industry and it’s changing landscape.

“It’s an economic fact. There are more people of color than ever before…” Shonda told the magazine. “When the shows start doing bigger numbers than what they think are going to be their top ten shows, it becomes really hard to suggest that it’s a trend.”

“Of course that has to happen, but it is more about people working autonomously, independently, to create their own structures, mechanisms, companies, outlets.” Ava DuVernay, director of Selma suggested. She also tweeted about her excitement over the magnitude of the photo and it’s representation she hopes it inspires.

I hope someone sees this and thinks: “I will live the life I choose.” Love to Mara, Shonda, Issa + Queen Debbie. xo. pic.twitter.com/tu6tN2toLZ

We love it! This is Urban Grace at it’s finest. The Game Changer’s issue hits stores April 17.