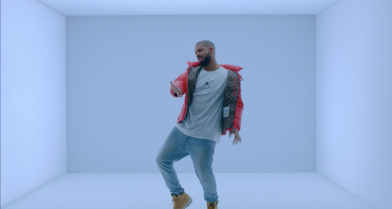 Drake’s video for “Hotline Bling” came out this week. The video is an obvious homage to our TLC days. Right after the video I listened to “No Scrubs” and played Where in the World is Carmen Sandiego. Ah, I miss the 90s. The video is beautifully executed and Drake’s seducing robot moves are going to be the next dance craze. But is this video progressive in representing body positivity? Sure, we have thick girls, light lights, dark girls, and some girls dancing in the shadows, but shouldn’t we be wanting a bit more.

It’s a known fact that the rap industry has always had problems with the way that it represents woman. You have to be phat, or have a big butt, or boobs, or a cute face, and of course have long, straight hair. The music videos perpetuate that image. If don’t look like that, then no rapper is going to want to be with you, which is fine. How many of us really want to marry Lil Wayne? But the problem is some of the young men listening to the music start to believe the lyrics and the perfect woman that they describe.

When videos come out that are filled with women dancing, I’m left wondering does this video support body positivity or is a step in the wrong direction. Drake’s video for “Hotline Bling” does try to incorporate some women of different body shapes, but it fails to escape the pressures of representing the perfect woman. The opening scene of the video is filled with two rows of light-skinned women, and the viewer is left to assume that these women are the ones operating the HOT-line. Sure, as the video progresses, you start to see some women of different skin tones, but camera fixates on the curves of their bodies.

There’s no denying “Hotline Bling” is aesthetically fascinating to stare at. As you keep looking at the women the video represents, it like many other rap videos fails to represent body positivity and furthermore represents women in a problematic way. To no surprise, the woman are objects to stare at in what seems to be the nucleus of Drake’s mind. Maybe the video for “Right Hand” will be a bit better.